Henry V Throughout History: Unto The Cinema 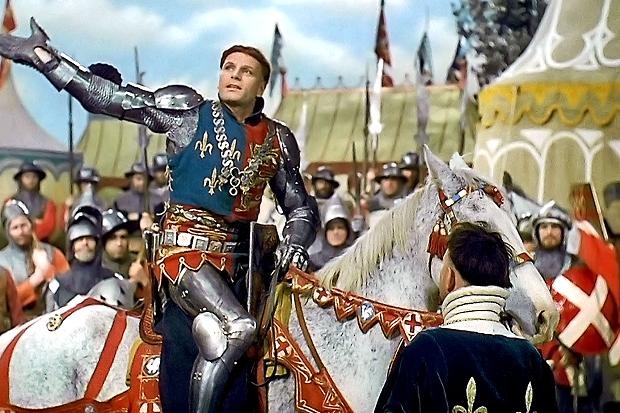 As our quest to chart the cultural history of William Shakespeare’s Henry V continues, we come to the first cinematic adaptation.

The Bard’s Henry V history play made its big screen debut in 1944 – intended as a morale-booster for the British during World War II – with the iconic performer Sir Laurence Olivier in both the title role and the director’s chair. At this point, Olivier was a few years away from his knighthood, but had already earned much acclaim, and two Oscar nominations.

Rather than a modern reimagining, Olivier’s version of Henry V is a clear tribute to the theatrical heritage of the play’s Shakespearian origins. It begins with a title card proclaiming ‘The Chronicle History of King Henry the Fift with His Battell Fought at Agincourt in France,’ a respectful reference to the longer-form title that would have been seen on the earliest manuscripts of the play.

From this beginning, Olivier’s swooping direction takes us skyward through the sights of an Elizabethan London, created – it would seem – from miniatures and matte paintings. From there, we descend into a recreation of the original Globe Theatre.

Here we are met with a brightly coloured rendering of Shakespeare’s ‘wooden O’, full of vibrant colours and revelling crowds. Showcasing a spot of accuracy, the higher levels of the theatre are filled with upper class costume and the lower rungs with more common clothing.

Apples are touted and sold like hotdogs at a modern American football match. A man dressed in a very Bard-esque outfit walks the crowd, catching the eye and suggesting that William Shakespeare himself is among this audience. The Chorus (played by Leslie Banks) then delivers the opening narration, looking directly down the lens as he asks all audience members to enlist their ‘imaginary forces’ to bring Shakespeare’s words to life inside their own heads.

It’s a wonderful thought to consider that original cinematic audiences of this film may have expected the movie to stay like this – with the film camera acting as our point of view as a member of the crowd at the Globe.

This is not the case, though, as Olivier soon lends us his own ‘imaginary forces’ and fades away from the Globe to his studio recreation of Southampton, with sails and riggings setting the scene with a rich green background of a matte-painted field behind.

Beginning with this scene, Olivier gradually strips away the Globe’s humble staging altogether, transitioning into an epic cinematic experience shot on real fields and shores with hundreds of extras and animals recruited, bringing a sensational scale to Henry V that Shakespeare could only have dreamed of within his theatrical constraints.

Added to this, Olivier’s performance adds a sense of reality to proceedings. His rousing speeches on French shores cannot help but inspire everyone watching, while his believable guilt at the impending deaths of his loyal people, during a pre-battle fireside scene, makes his Henry utterly likeable.

Olivier’s charisma shines through, and his Oscar nomination for the turn was well earned. He also won an Honorary Award at the 1947 Oscars for his efforts as an actor, director and producer of this Henry V film. As a brief snapshot of his wonderful performance, you can see one of his speeches here:

It’s not hard to see why Olivier’s Henry V became one of the first hugely successful cinematic Shakespeare adaptations, earning not only critical acclaim, but also box office takings of over $2 million. Olivier’s iconic performance and confident direction make this a film that has successfully stood the test of time, too.

If you’re looking for somewhere to start with Henry V, this version – colourful, easy-to-follow and respectful to the original – is a fine one to begin with.

Next up, we’ll be looking at some more theatrical versions of Henry V including, again, Sir Laurence Olivier.