Henry V Throughout History: The Brightest Heaven Of TV 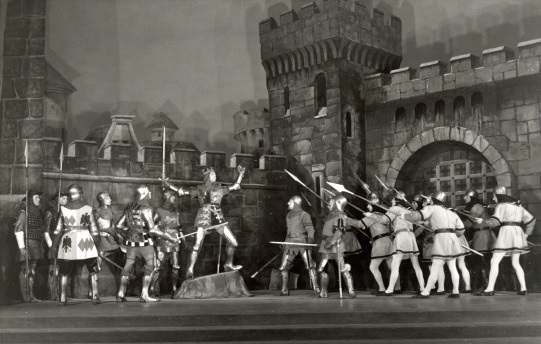 As we continue to explore the significance of William Shakespeare’s Henry V history play, we come to the famous play’s first foray onto the small screen.

Shakespeare’s Henry V has featured on British television no less than six times over a span of six decades. The first of these productions came in 1951, six years’ after Sir Laurence Olivier’s iconic portrayal appeared successfully in cinemas.

The film grossed impressive-for-the-time box office returns of more than $2 million, so it’s no surprise that TV stations were soon trying to adapt the play in their own way.

The 1951 version came from BBC’s Sunday Night Theatre, a long-running series that ran for more than 700 episodes. Clement McCallin – a prolific British actor who appeared in the films Murder In The Cathedral, The Rossiter Case and The Lady With The Lamp in the same year – took the title role.

McCallin had previously played King Henry in 1937, in a Royal Shakespeare Company production directed by B. Iden Payne. The image (above) shows McCallin’s stage Henry rallying his troops, with his gesture suggesting a heroic portrayal of the character.

Clive Barker and Maggie B. Gale’s book British Theatre Between The Wars describes McCallin’s stage Henry as ‘a type of pre-Raphaelite king with bobbed hair’. They added that his costume had ‘fashionable eccentricities [such] as golden bells on his armour, as if [he was] leading a nation of playboys on a bloodless galliard through France’.

Barker and Gales text goes on to describe this more lavish portrayal of Henry V as ‘in keeping with the coronation year’, referring to the crowning of King George VI and Queen Elizabeth that took place in the same year. Of course, though, there was no guarantee this patriotic portrayal would be reprised for the television version.

Unfortunately, we’ll never know how Clement portrayed Henry in front of the cameras, as no recording of the televised play exists today. The reason for this is the fact that an overwhelming majority of Sunday Night Theatre’s 721 episodes are missing. Of this nine-year run, only 27 episodes are believed to still be available today.

We do know a few salient details, though. The broadcast was entitled The Life Of King Henry V, and it was aired only twice. The premiere came on Sunday 22nd April, with a repeat showing following on Thursday 26th April. It is rumoured these broadcasts, like most of Sunday Night Theatre, were never recorded for future release at all.

Marius Goring – best known for his four films made with filmmaking duo Powell and Pressburg – was a part of the core cast. He played the Chorus, while Willoughby Gray (who later appeared in more than 50 episodes of The Adventures Of Robin Hood) played Pistol, a notable soldier in Henry’s army and a key source of comic relief in the play.

With World War II concluding only two years before Henry V’s British broadcasting debut, it’s plausible that McCallin’s performance would echo his fashionable and patriotic stage version from 1937. Of course, though, we’ll never know the particulars of 1951’s Henry V for sure.

Coming up, we’ll be looking at the earliest TV version of Henry V that is still available today.