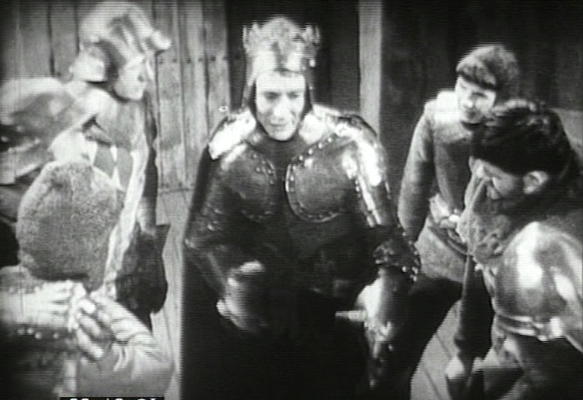 This week we’re going to look at some of the earliest footage you can still watch of William Shakespeare’s Henry V being performed.

This is part of our ongoing quest to chart the history play’s cultural significance in the years since The Bard penned it, tying into the wider Road To Agincourt project happening in and around Hampshire this year.

Last week we looked at the first British television version of the play, a 1951 production, starring Clement McCallin as Henry. Following this came a 1953 version starring of the play with Colin George of the Royal Shakespeare Company in the title role. Sadly, Colin George’s performance was never recorded for future viewing.

Next came a 1957 version, with West End idol John Neville in the role of Henry. This version was shot in a studio by Peter Dews as the curtain-raiser for a series called Television World Theatre, which went on to stage a series of plays for the BBC. The main image is of Neville in action.

A staggering 4.5 million viewers tuned in to the premiere screening on 29th December 1957. By the time Television World Theatre ended, its ratings had risen to around 8 million. Although there are no clips readily available online, you can read a detailed run-through of this fascinatingly low-budget production by clicking here.

Not soon after this production, a version of Henry V came to the screen, in 1960, that has managed to make its way onto the internet to quell curiosity. It was filmed as part of the BBC series An Age Of Kings, which staged a series of Shakespeare’s history plays from Richard II to Richard III.

This production of Henry V came about halfway through the run. It starred Robert Hardy, who went on to star as Cornelius Fudge in the Harry Potter movies. Alongside him was Judi Dench, who of course went on to become a global superstar and earn a damehood in the process.

This version we can actually show to you, which is an exciting prospect. Have a look here at Hardy and Dench in action. Hardy plays Henry, while Dench portrays Princess Katherine of France…

As you can see, the production here isn’t entirely dissimilar to those seen in the Laurence Olivier film. The costumes are lavish, and the performances are fairly expressive. It lacks the budget and colour of Olivier’s version, but from the scenes that we’ve seen, Hardy and Dench’s Henry V was a very watchable production. It’s no wonder that Television World Theatre went on to become a sizeable success.

Next week more findings from our journey through the history of Henry V.