Henry V Throughout History: The Poring Dark – On TV 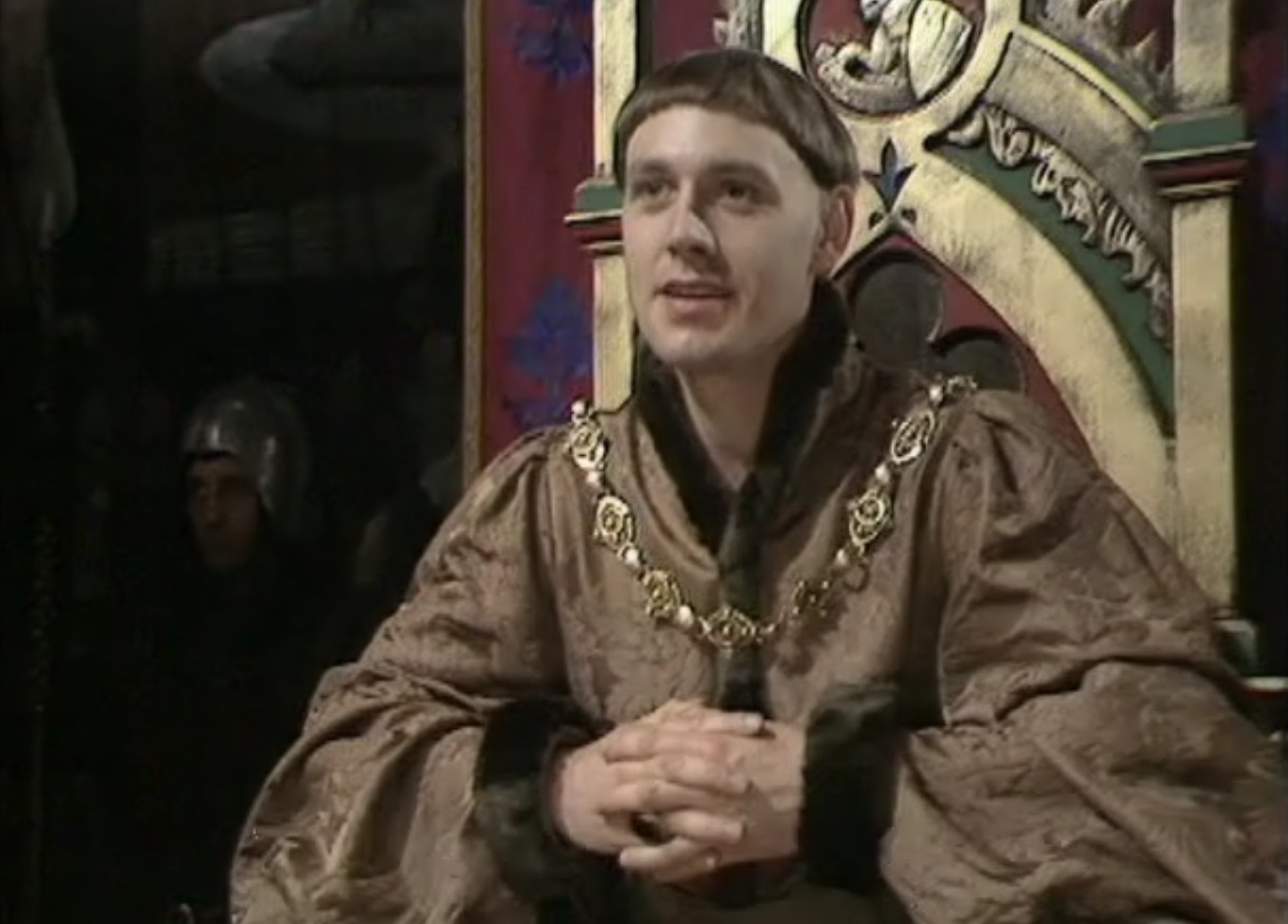 As part of our on-going mission to chart the cultural significance of William Shakespeare’s Henry V, we begin looking at the 1979 TV version directed by David Giles. This week, we’ll focus on the opening scenes, and how they set the stage for a more realistic and darker production.

“Tis your thoughts that now must deck our kings,” the Chorus (Alec McCowen) begs during the opening moments of the BBC’s 1979 production of Henry V. Clearly, this script is sticking faithfully to William Shakespeare’s source material despite the decent-sized budget behind this televised version of The Bard’s famed history play.

As ever, the Chorus’ words are intended to urge the audience into forgiving the simple trappings of a theatrical stage. He’s essentially asking us to use our imaginations to add charging horses and foreign fields to the simply-staged story in front of us. In this case, though, the Chorus needn’t have bothered. The costumes, performances and sets here are convincing enough to suspend this viewer’s disbelief for two-and-a-bit hours.

Interestingly, this BBC version veers towards a sense of realism, utilising realistic-looking locations instead of glamorous matte paintings and lavish artificial sets as seen is Laurence Olivier’s famous film adaptation 30 years’ prior.

As Henry’s aides urge him to charge to war, in this BBC version, the humble church walls that surround the discussion make the scene feel grounded and believable. Henry, resplendent on a red and gold throne, looks a little out of place, which is an interesting way to introduce him.

Televisual leading man David Gwillim stars as King Henry, bringing an intense fierceness to the role. At this stage, Gwillim would already have been a familiar face to fans of televised theatre. Most recently, he had played Prince Hal (the young prince who would eventually become King Henry V) in the televised production of Henry IV earlier in 1979.

In this early church-set scene, Henry is filled with rage, twice. Unlike Olivier’s Henry, Gwillim’s version is immediately shown to be fallible and quick-to-anger. No longer is Henry presented as a Godlike being full of chemistry and likeability. Most of the supporting cast give muted performances, allowing Gwillim’s emotional take on Henry to stand out even further.

As Henry promises to “break [France] all to pieces” and turn tennis balls into “gun stones”, David Giles’ direction pulls in close to Gwillim’s tellingly unhappy facial performance, enhancing this sense of anger so the audience can’t miss it.

As this scene ends, though, Henry skips off followed by laughing followers, which jars somewhat with his prior actions. As first impressions go, this is one of mixed messages, then. This scene presents a changeable and uncertain king. It’s certainly a more conflicted and murky portrayal than Olivier’s.

Following this introduction to Gwillim’s uncertain Henry, the Chorus returns and promises to transport our story to Southampton and the plot to kill Henry. This dark subplot was entirely absent from Olivier’s version, and shall be the subject of our next blog.

Next we’ll look at how the 1979 BBC version of Henry V portrayed the Southampton plot.