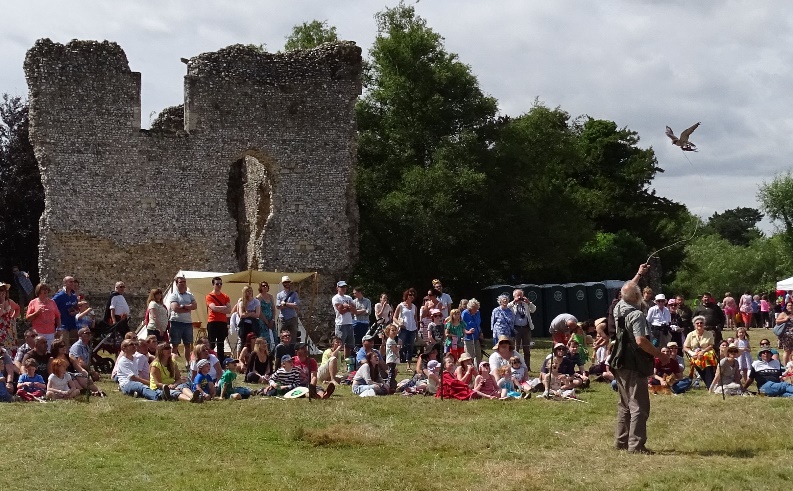 The town of Bishop’s Waltham recently celebrated the 600th anniversary of Henry V’s visit in July 1415. Henry V began to assemble and prepare his army in Hampshire before setting sail for France in August, and he is known to have stayed at the Palace at Bishop’s Waltham for 10 days.

Now a picturesque ruin, the palace provided a scenic backdrop for a host of activities organised to celebrate those historic few days.

Here Penny Copeland, a Research Fellow/Technician in the Archaelogy Department of University of Southampton, gives a personal account of the festivities:

An open air performance of the Tempest – and didn’t the heavens know it. There was a veritable tempest right in the middle of the performance – highly atmospheric!

A celebration of Henry V with the screening of Kenneth Brannagh’s rousing film based on Shakespeare’s play.

A Medieval Experience. Everyday activities and pastimes from the period were on show, such as wood turning, cookery, weaving, even fishing in the Bishop’s pond.

Preparations for battle were also present. We watched the De Warenne archers aiming to ring a bell with a long bow. We know that the archers were vital to the success of the English army – and the bell will only ring when it is hit hard in the centre, so it is a show of skill! The men-at-arms were training at billhooks and fighting. There was also celebration – the sound of Medieval music played on early instruments echoed around the ruins. The Piggery Jokery puppet show by the Hand to Mouth Theatre was themed around a farmer, his pig and the seasons (with a Green Man), accompanied by a hurdy-gurdy. The Storyteller called everyone with music, there were strolling players and static musicians such as Damian Clarke on the Hammer Dulcimer.

In among the modern visitors and the high-vis jackets, there was just a hint of what the preparations for battle might have seemed like – mustering large numbers of tents, noise from metal clanging and dogs barking, music drifting in from different parts, smells of cooking, men talking with camp followers and children darting around.

Perhaps there was even the air of excitement in anticipation of an important battle ahead as more and more men turned up to fight?

Picture 3: Tents, banners and the very best in transport – surely Henry V would have approved…