Henry V Throughout History: The King Is But A Man 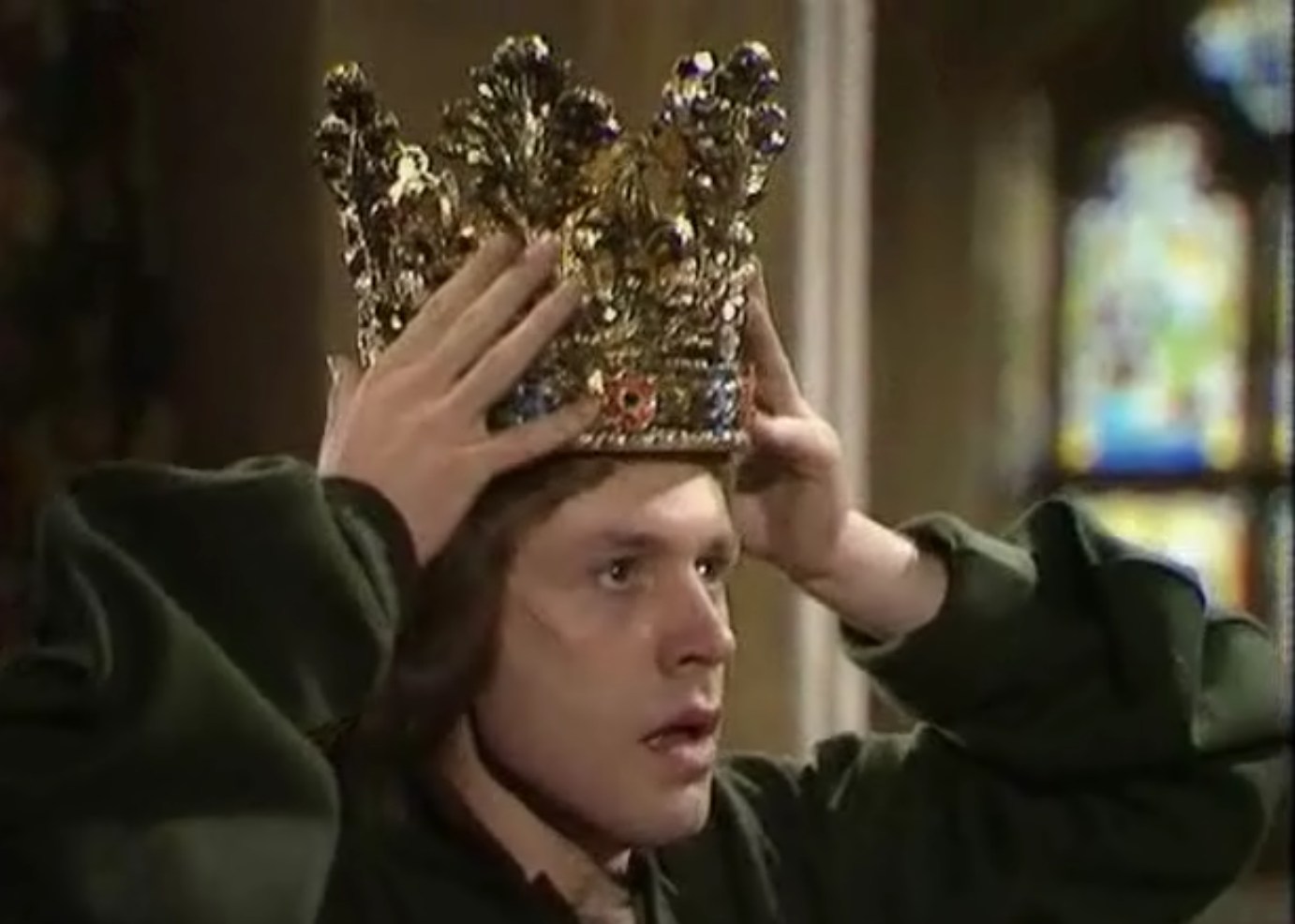 There’s a fascinating spot-the-difference game to be played between different versions of Henry V. In the act of script editing, the same scenes and characters can become very different indeed. Shakespeare’s original text can be taken in vastly different directions depending on the agendas of the filmmakers behind the camera.

As we’ve discussed before, Sir Laurence Olivier’s 1949 Henry V plays one extreme – the ‘heroic Henry’ version, as it were. Olivier strived to remove the dark and morally questionable material from Shakespeare’s text, resulting in a propaganda-like finished product. This was relevant at the time, as Olivier aimed to encourage national pride in his wartime audience.

The BBC’s televised version from 1979 – directed by David Giles – takes a completely different tact. As we’ve explained in the last two blogs, the opening scenes of this adaptation present Henry as a hugely changeable King. Away from the demands of making a political and patriotic film, Giles is free to question Shakespeare’s text in a bigger way.

One minute, Henry (here portrayed by David Gwillim) jokes and laughs, but the next he threatens and commits men to death. Even though the same plot – Henry deciding to invade France – sets the scene, the different script creates a far less likeable Henry.

After Henry casts his vengeful judgement on the Southampton plotters (scenes which were entirely cut from Olivier’s version, as we have already in our previous blog), the 1979 version continues to present the character of Henry in a darker and less familiar way.

As the televised play continues, we reach Henry’s first big motivational speech. This monologue begins with the iconic ‘once more unto the breach’ line, and is often presented as a rousing and patriotic scene. Here, though, it is delivered differently. Henry jumps around with nervous energy and a manically dextrous face, almost sneering as he urges his men into battle.

This darker side of Henry surfaces again at the gates of Harfluer, where the BBC script refuses to remove Henry’s threats. “I will not leave the half-achieved Harfleur till in her ashes she lie buried,” goads Gwillim, again embracing the more villainous side of Henry’s personality.

At the English camp, where Henry dons a disguise to talk to his men, Gwillim subverts his performance entirely. No longer is he angry and manic, but instead delivers the line “I think the king is but a man” with a sense of pure honesty.

When Olivier delivered this line, it seemed like another moment of pomp and pride. With Gwillim, though, it seems more introspective, as if he’s having a change of heart and beginning to analyse himself after all his threatening and killing.

Henry seems introspective here, not boastful. Gwillim’s version seems like a deeper character, then, with a confused and conflicted personality beneath the surface of his kingly confidence. This scene is somewhat beautiful, then, and it’s all down to Gwillim’s performance.

Indeed, the scene isn’t too different to its 1949 counterpart in a stylistic sense. Both take place around a campfire, with a makeshift hood hiding Henry’s identity. Dull grey backgrounds frame the action both times. Gwillim’s Henry seems much more three-dimensional than Olivier’s though, with script and performance working in unison to portray the king differently to the film that came three decades before.

When Gwillim’s introspective Henry is angered at the end of this scene, then, it seems as though he’s lost control once again. The character remains transfixing in his changeable-ness, with far more depth than the predictable ‘heroic Henry’ of old.

Admittedly, this version of the play isn’t perfect (the momentum drops to a slow trot whenever Gwillim is off-screen), but it paints an interesting portrait of a King who questions himself and his intentions as the play goes on.

Next, we’ll see how Gwillim’s Henry fares at the conclusion of the 1979 TV play.