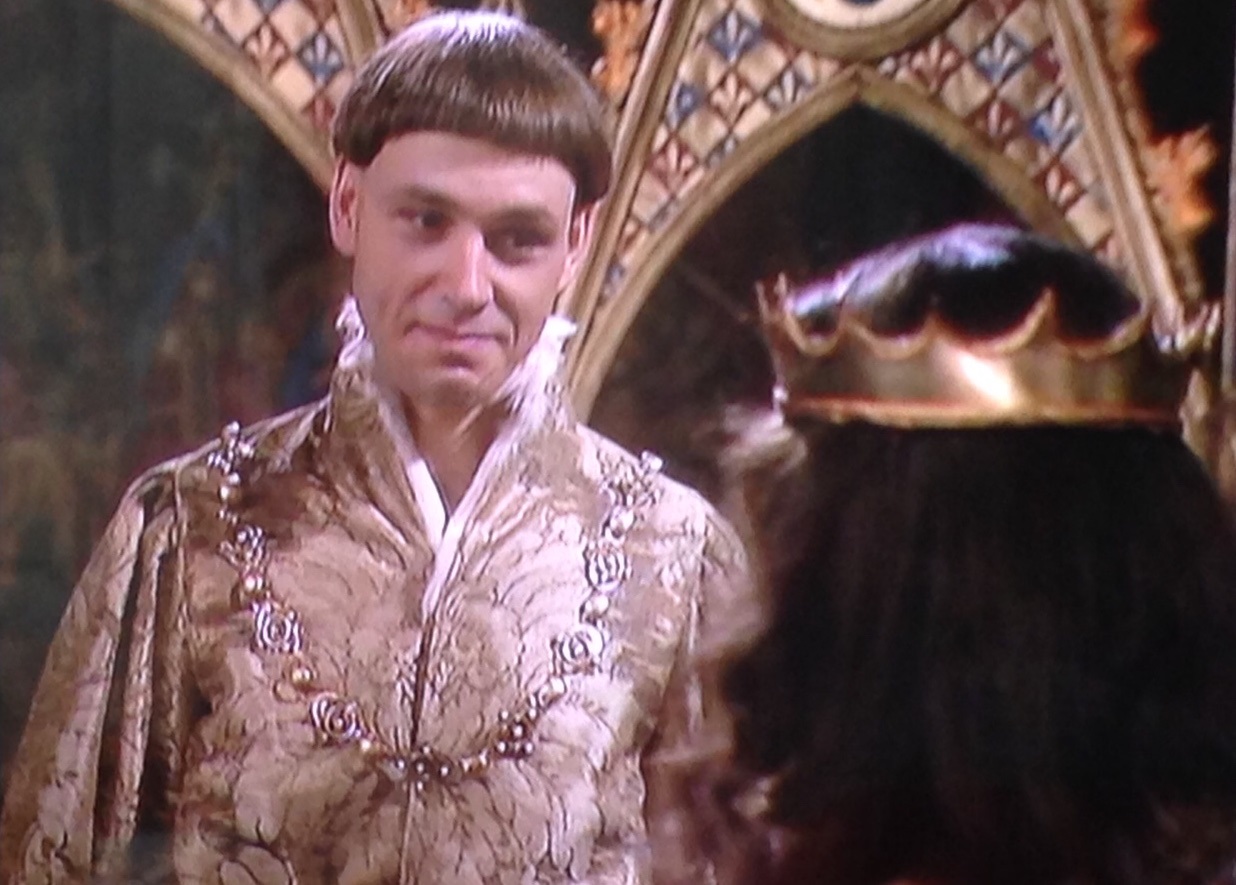 This is our final analysis of the BBC’s 1979 production of Henry V. So far, this televised adaptation has portrayed Henry as a conflicted and difficult-to-read monarch – at times ruthless and brutal, at others quiet and contemplative.

Indeed, this changeable version of Henry is miles apart from Laurence Olivier’s filmic Henry, who was portrayed as a hero to wartime audiences in 1944. Away from the cultural context of World War II, Henry is open to more analysis. The public doesn’t need him to be a flawless protagonist anymore. Instead, we can analyse his character in a deeper fashion.

How does this conflicted version of Henry fare in the television play’s final third, then? Well, his attitude continues to sway between gleeful pride, quiet nervousness and righteous rage.

David Gwillim – the actor who plays Henry – brings us a mix of all three in his performance of the famous Saint Crispin’s Day speech. For Olivier, this was a rousing battle cry, a moment to inspire his troops. For Gwillim, it is an opportunity to showcase Henry’s inner turmoil.

He still exudes confidence at some points, but at other times the camera pulls in to emphasise the worry on his face. The threat of death feels more real here than it did with Olivier’s Henry. While Olivier served his historical purpose to support the war effort, Gwillim chooses to delve into the multifaceted nature of the kingly character. His Henry shouts with confidence, but whispers with doubts and fears. It really is an enigmatic performance.

By leaving all of Shakespeare’s material in – not cutting out negative aspects like Olivier did – we also see a darker side of the character. Gwillim’s Henry makes decisions that are ‘expressly against the law of arms’. He orders that all French prisoners be murdered, igniting a discussion of whether he is a ‘gallant king’ or an ‘arrant piece of knavery’.

This discussion raises questions with the audience, too – is Henry a good king, or a killer? A hero or a villain? A victor or a war criminal? Some would say this discussion is the biggest talking point of the play, and it’s hard to disagree. Although Henry’s victory is a huge success, his methods and the body-count in his are harrowing when you stop to think about it.

If you’re looking for a version of Henry V that delves into these murkier moral grounds and debateable decisions, then – you could do much worse than picking up a copy of the 1979 Henry V. Following the battle, Gwillim’s reaction to the numbers of the dead will give you plenty to talk about, too.

However, you’re still going to get a happy ending. Whether you think Henry is a criminal or a hero, he is still the victor of the battle and reaps the rewards that such successes grant him. In the final scene, we see Gwillim resplendent in green robes and agreeing to ‘love’ France, his newly conquered domain. This lightly-lit scene contrasts with the preceding story somewhat. It’s also a little jarring to see Gwillim’s darker Henry flirting helplessly with the French princess Kate.

On the whole, though, the 1979 Henry V is well worth a watch. If you want to see a faithful adaptation, with a terrific performance at the heart, seek this version out on DVD.

Next up, we’ll begin looking at Kenneth Branagh’s Henry V, a cinematic production released in 1989.