Henry V Throughout History: The King Has Killed His Heart 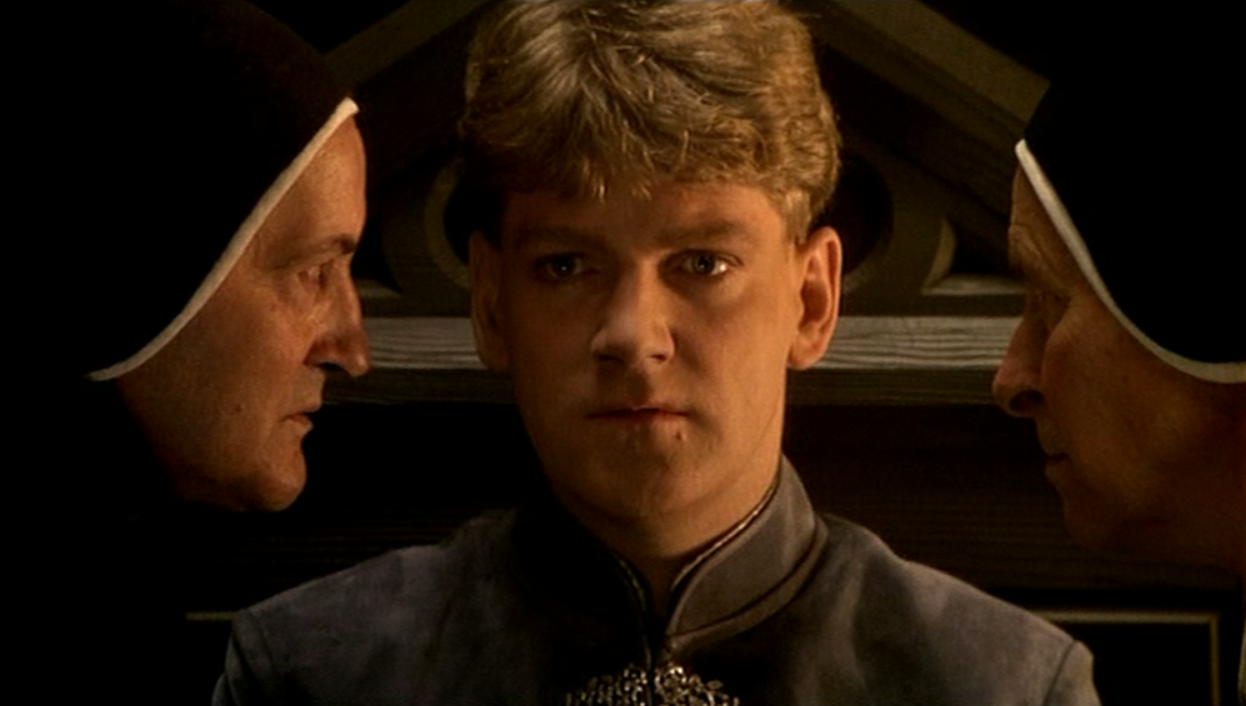 As our journey through the different filmed versions of William Shakespeare’s Henry V continues, we come to a very significant incarnation – Kenneth Branagh’s 1989 film.

In 1989, Kenneth Branagh took the task of adapting The Bard’s history play Henry V for the big screen. Like Laurence Olivier before him, Branagh adapted the script, directed the film, and portrayed the title character himself.

At the time of the film’s release, fans of Shakespearian cinema may well have already seen Olivier’s version, which presented Henry as a charismatic and adored leader, intended to inspire patriotism to a wartime audience. Audiences may have even witnessed David Gwillim’s darker televised portrayal in 1979. So how does Branagh’s take compare?

As the film begins, it’s immediately clear this version of the play will be a solemn and modernised affair. The opening credits slowly appear in blood red text against a pitch-black background. Solemn orchestral music broods in the background.

Derek Jacobi plays The Chorus, who delivers his opening monologue in dark modern clothing while wandering through a film studio soundstage filled with unfinished sets. This gets the message across – this is a modern filmic adaptation, not an imitation of what’s come before.

From there, we are thrust into the action as Jacobi leads us through a huge black door. The pacey script then rattles through the opening conversion between the Bishop of Ely and the Archbishop of Canterbury at speed. This scene sometimes seems like a dull opening, but here – sped up and staged in a gloomy candle-lit room – feels tense and intriguing. They hatch their plan to tempt Henry into war with France, and we’re then immediately taken to a throne room.

Here we await Henry’s arrival for a few seconds. In the long shadowy room sit advisors and friends in two rows along the walls. Another hefty door opens, and there – obscured by shadows and menacingly silent – stands the King. As Henry walks towards his throne, each person’s head individually bows to him as he walks past. It seems there’s a sense of fear around Branagh’s Henry. Perhaps this familiar story won’t be so predictable, after all.

When the King speaks, Branagh delivers his lines in a softly spoken manner that gives him an air of eerie calm. When he asks, “may I with right and conscience make this claim [to the throne of France]?” you can’t quite tell if he asking merely for information or whether he’s already made up his mind. Maybe, he’s just curious about the deaths his war will entail. Will they end up on his conscience, or are they right and just?

Either way, it only takes a few lines of dialogue from Henry’s closest friends (including the magnificent Brian Blessed as his uncle, the smarmy Duke of Exeter) to convince Henry of his claim’s legitimacy.

Next, in comes a representative of the French monarch. Bearing a taunting gift of tennis balls for Henry, who is perceived by France as savouring ‘too much of [his] youth’. Henry responds with a coolly-delivered but bitterly angry speech. He speaks of vengeance and mockery, and it becomes clear that Branagh has no intention of hero-worshipping Henry. Shakespeare’s dialogue in this scene clearly envisages the King as a vengeful and angry monarch, and Branagh embraces that wholeheartedly.

Before we move onto the Southampton scenes, Branagh’s script editing ensures we understand a little more of Henry’s background. Branagh leaves in Shakespeare’s tavern scene, where Henry’s former friends (banished by the King in the events of Henry IV) lament the King has ‘killed [the] heart’ of Falstaff – a mentor and ally to Henry when he was still just a Prince – by banishing them on his rise to power.

Branagh even includes a flashback to a scene from Henry IV to highlight Henry’s descent from fun-loving Prince to vengeful King. He shows us Henry’s fake smiles as his internal monologue decides to abandon and cast out his friends. These scenes add depth to the character that other filmed adaptations have struggled to convey. He wasn’t always like this, but clearly Henry’s angry actions against France aren’t a one-off, they’re practically a personality trait.

Clearly, Branagh’s Henry is a troubled and dark character. It’s also abundantly clear Branagh has put careful consideration into his adaptation process. Unlike Olivier, Branagh won’t present a biased or one-dimensional Henry, but a version that honours every aspect of Henry’s personality – even the dark side.

Next time, we’ll look at how Branagh’s Henry V presents the Southampton plot.