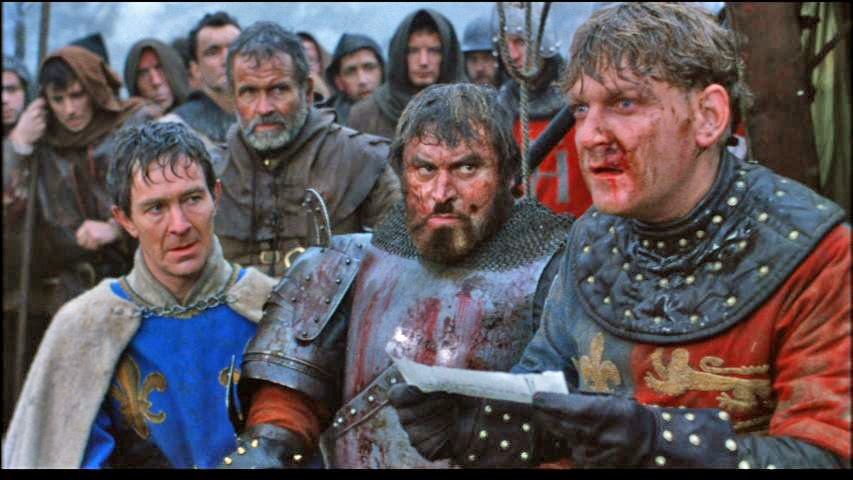 And so, we reach our final analysis of Sir Kenneth Branagh’s 1989 film production of Henry V. So far, we’ve seen that Branagh’s version of Henry is a far darker soul than Laurence Olivier’s incarnation of the King. But how would this change as we depart Southampton and travel to France?

Once across the channel, Henry has much to contend with – motivating his troops, punishing the misbehavers, and battling the French enemy. This means there’s plenty of material here for Branagh’s darker portrayal to delve into.

The famous ‘once more unto the breach’ speech at Harfleur becomes a grim scene, in this film. It is delivered during battle, with fire, smoke and explosions all around. Branagh shouts his lines, as the fight rages behind him.

When this battle is nearly won, Henry demands that Harfleur surrender, threatening them with death and destruction. This scene could easily be shortened or removed to make Henry appear more heroic and less violent, but Branagh chooses to leave it in, framing this fierce monarch with a dark clouded sky for a background.

The next truly miserable scene comes when Henry orders the death of his former friend Bardolph, because he robbed a French church. To add context to this decision, Branagh cuts away to a flashback. Henry remembers being told ‘not to hang a thief’ (dialogue from Henry IV Part I) when he becomes King. Branagh’s emotional performance shows us how difficult this moment is for the King.

From the depths of this darkness, Branagh brings Henry on a character arc towards heroism. The fulcrum of this development is the campfire scene, where Henry dons a disguise to walk among his subjects and hear their opinions.

Upon hearing his men question the legitimacy of his claim to the French throne, Henry realises he may be leading these innocent men to their unwarranted death. He later begs God to save them (superbly performed by Branagh), before heading back to his own quarters.

The day after experiencing this moral quandary, Henry must rally his troops. And here comes the second big speech. Now that Henry has had his moment of doubt and confided in God, however, his manner is much less angry and the colour palette of the film much more bright.

If you compare those two speeches, it’s clear that Branagh was attempting to present Henry as a character with many sides, developing from an angry young man to a worthy, adored King. From shouting angrily in the field of battle to eloquently delivering motivational words in the green of the forest, it’s quite a development.

This multi-faceted, arc-based approach means Branagh’s Henry is a far more conflicted character than Olivier’s, who was presented uniformly as a hero to his people. Instead, Branagh raises questions about monarchy, war and leadership by showing us a darker side to the coin and really digging into the moral dilemmas facing Henry.

After a dark and muddy final battle – which acts as a physical portrayal of the King’s internal struggle – Henry wins the throne, and completes his journey towards heroism. This comes as the battle reaches its grimmest moment – the French murder of the English baggage-carrying boys. After this, Henry, in a fit of rage, throws the French Herald to the ground.

And in this lowest ebb, Henry is told that he has won the battle. He is clearly shaken by the experience, but relieved that the war is over. He carries Robin (one of the luggage boys, played by a young Christian Bale) from the battlefield to the sounds of hymnal song, which blends into an epic orchestral score. It’s been a dark journey, but now it’s over – Henry is a hero.

The film wraps up with the familiar romantic scene, where Henry must woo his new French bride. It’s the stuff that comes before that really sticks with you, though – the King’s personal journey makes this film the most emotionally resonant Henry V ever to reach the big screen.

Next time – we’ll be looking at The Hollow Crown, the most recent BBC televised staging of Henry V.