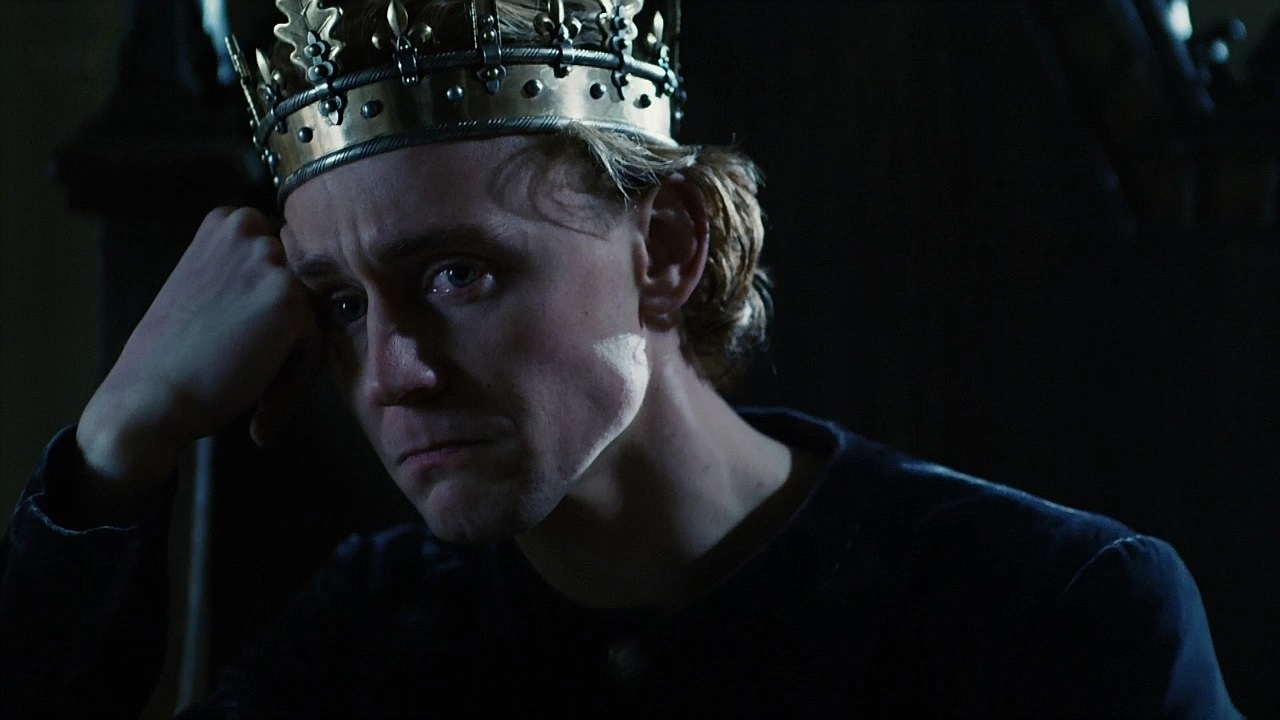 The final filmed adaptation of Henry V that we come to is the BBC’s 2012 TV series The Hollow Crown, which stars Tom Hiddleston as Henry.

The Hollow Crown builds up to Henry V by adapting Shakespeare’s preceding history plays Richard II, Henry IV Part 1 and Henry IV Part 2. This gives us extra context about Henry V’s personality, and the legacy he inherits from his father, Henry IV.

Henry IV – previously known as Henry Bolingbroke, or just Bolingbroke – is first played in The Hollow Crown by Rory Kinnear. He seizes the throne from his cousin Richard II (played by Ben Whishaw) during the first play in this cycle, Richard II. Throughout, Whishaw portrays Richard as weak and indecisive, while Kinnear plays Bolingbroke as a stern, firm character.

The Hollow Crown’s version of Richard II follows the structure of Shakespeare’s play, beginning with Richard banishing Bolingbroke from England after a dispute with Thomas Mowbray, the Duke of Norfolk.

Eventually, Bolingbroke returns around the time of his father’s death seeking to claim his inheritance, which Richard instead wishes to spend on funding a war in Ireland. Bolingbroke gathers his followers, and aggressively takes the throne. This culminates in a tragic scene where Richard resigns crown:

In this scene, Bolingbroke becomes Henry IV. His son, later to become Henry V, doesn’t appear until the next play – Henry IV Part 1. When Tom Hiddleston’s future king does appear, though, he hardly seems a good fit for a kingdom’s ruler. Before becoming Henry V, he is known as Prince Hal – a layabout who would rather drink hours away in London taverns than embrace his destiny as a future monarch.

His drinking buddies are the comic relief character Sir John Falstaff (played with wondrous timing and zeal by the great Simon Russell Beale) and the scheming joker Poins (played by David Dawson). With these two actors, Tom Hiddleston finds riotous levels of fun in the scenes from Hal’s wild youth. Of particular note is the bar scene where Hal and Falstaff take turns mocking Hal’s father, the King.

When Hal is eventually summoned from this drunken wilderness, his reunion with his father (now played by Jeremy Irons, not Rory Kinnear) is an emotional scene that showcases Hal’s ashamedness:

Hal goes on to join his father in battle and find honour in defending the throne. He defeats the rebel leader – the nobleman Henry ‘Hostpur’ Percy, played with a sense of arrogance by Joe Armstrong – in single combat. This makes for a short but gritty battle where Hal just barely dodges death before stabbing Hotspur in the chest. Shortly after, Henry IV Part 1 concludes with King Henry IV riding over the battlefield.

In Part 2, we see Hiddleston’s Hal put further distance between himself and his troubled youth. Despite returning to London, he only shares a few short scenes with Falstaff and ultimately rejects him on the day of his coronation, bitterly sniping that ‘I know you not, old man’.

Hal embraces the crown, and puts his wicked ways aside after making peace with his father on the day of his death. Hiddleston plays this transformation wonderfully, particularly in the scene where he accidentally takes his father’s crown a little prematurely:

All of this context means that Hiddleston’s version of King Henry V is already a fully developed character – with flaws and fraught relationships – before we’ve even got to Henry V.

Indeed, he’s got something of a head start on the other screen portrayals of Henry. Laurence Olivier never appeared in Henry IV, while Kenneth Branagh only featured scenes from Henry’s drunken years as flashbacks.

Next up, we’ll see how Tom Hiddleston fares in the title role in Henry V.