Behind the music of The Road To Glory 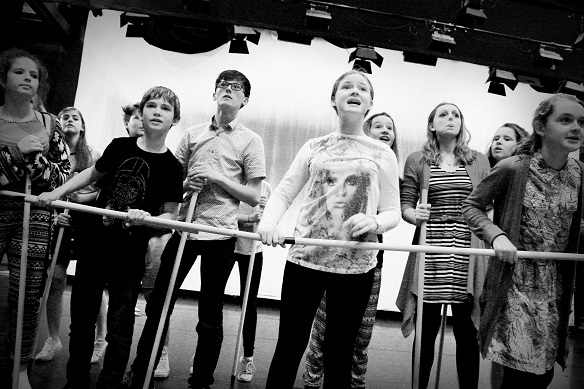 Music composer David Lewington wrote the enchanting music for The Berry Theatre’s specially-commissioned play The Road To Glory, which tells the little-known story of Hampshire’s role in the now legendary Battle of Agincourt.

Here, in this 60-second style interview, the talented musician reveals his thoughts behind the music and tells of the challenges faced when writing medieval style music for the historical play…

RTA: Can you tell us how you became involved with The Road To Glory…

DL: The director Daniel Hill and I are close collaborators having worked 10 shows together over three years and so he asked me to be involved in the project.

RTA: You and Daniel Hill were keen to research the Battle of Agincourt during the writing period. What form did this research take?

DL: Our research trip to Azincourt, the village by the battlefield site complete with museum, was eye-opening. Both Dan and I are fairly pacifist-leaning in our tendencies and I was certainly pre-disposed against the idea of making something triumphalist – equally, there was no place for this in Neil Duffield’s text. The area is unassuming, the battlefield now arable farmland and the museum is somewhat sceptical of our attachment to the legend. What was most illuminating for us was the scale of the bloodshed which although statistically disputed was nonetheless disheartening. It was helpful for us to see the French perspective on events so that we could get past our own initial understanding of the events as an English triumph against adversity and focus more on the individual lives on both sides that were damaged or transformed by the conflict – marrying well with Neil’s text.

RTA: Can you tell us more about what you were looking to achieve with your music for the play?

DL: My aim with the music is to support and bolster the actors and the action. To support their narrative drive and to bolster their message’s impact. Above all of this though, I’m aiming to make music that connects the performers to the text, the audience to the characters and everybody in the space to the experience – this is in my opinion the key to successful, affective art.

RTA: And did you face any challenges recreating medieval music?

DL: I had to be slightly anachronistic in my choices as music of the precise period referred to in the play would not be as layered, versatile or interesting as the audience might expect. Therefore there is an initial perspective issue to be resolved – marrying this expectation (Polyphonic singing for example, a familiar sound when thinking of this era but actually a later development in European music history) with the historical accuracy without damaging either is a challenge. Particularly so when you bring the young performers into the equation, for whom the sound and delivery of the material must be relevant and comfortable to their ears and tongues; so there were many hidden factors to be sensitive to.

RTA: Speaking of the young performers, how did you find working with them on The Road To Glory?

DL: I am a regular composer for Youth Theatres and so I am both familiar and always excited to work with young passionate people driven by ideas and imagination. That formula was present in The Road To Glory cast also – the material was already great but these young people gave it a powerful resonance and vitality.

RTA: How long did it take you to write the music?

DL: In all I spent an intensive fortnight writing the music, but there were rewrites and additional pieces that came from rehearsal at a later stage.

RTA: Have you written for a historical play before … Where did the inspiration for this particular style of music come from?

DL: This year I was also writing for former Point associate artists Milk Presents’ show Joan, which featured a similar style of music in parts. This crossover was helpful in allowing me to workshop the sounds of the era, from my perspective as a modern musician. Steeleye Span, a band known for their folk-rock arrangements were a useful resource in developing a fusion sound that would appease both audience and performer, but the strongest inspiration was probably Neil’s text, full of powerful imagery and effective dialogue as it was.

RTA: Is there a piece of music from The Road To Glory that you’re most proud of?

DL: It’s an original piece, born out of my arrangement of a contemporary song (Cutty Wren, which featured at the opening of the show) – The Swallow, with lyrics by Neil Duffield. I was most pleased with how it inspired and enthused the young performers, despite its old English folk vibes. They really took ownership of it too which I feel, as a composer for theatre, is the ultimate compliment.

RTA: And finally, what were you hoping the audience would take away from the music?

DL: Agincourt is painted as a glorious victory in the eyes of our nation. Our vision, for which I was to support with the music, was of a bleak and desolate environs where the innocent are swept up in a whirlwind of nationalistic fervour, culminating in a brutal and bloody act, as inglorious as it was fruitless in the grand scheme of the Hundred Years War. To that end, the mood I was looking to create was one of a looming sense of danger, of despair, utilising all the familiar and recognizable sounds of war (the drum and fife, for instance). I wanted to deliver a sound-scape that would oppress the characters whilst rallying and exciting the audience; hoping eventually that the audience would see the consequences of battle and analyse their own reaction to those sounds.

The Road To Glory is written by Neil Duffield and directed by Daniel Hill. Commissioned by The Berry Theatre, and supported by Heritage Lottery Fund and Arts Council England, the play tells the story of the role Hampshire and its people played in King Henry V’s journey to the Battle of Agincourt.