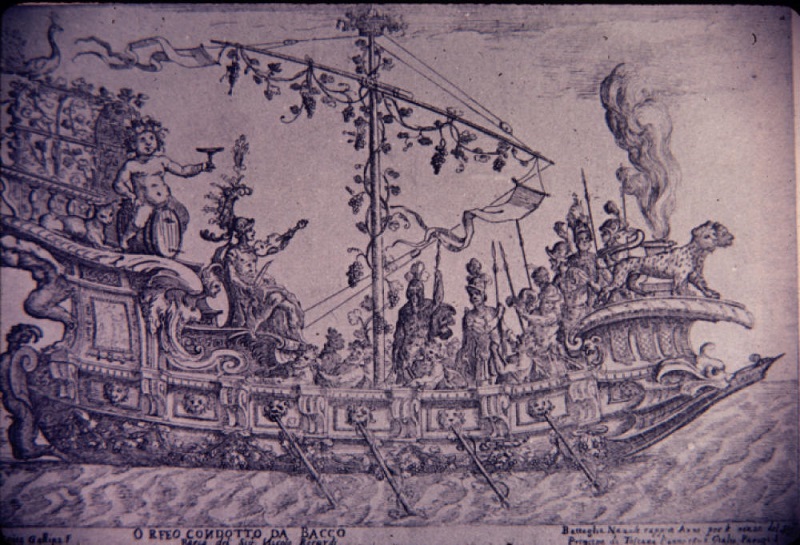 As we move into the second phase of the Road To Agincourt project, we begin to look at the legacy the Battle of Agincourt had on England’s maritime history. We look at how the famous battle shaped our region’s shipbuilding heritage and how it sowed the seeds of what was to become arguably the nation’s greatest protective force, the Royal Navy.

Working with this seafaring theme, Brenna Gibson explores how maritime scenes were presented on stage.

Peter Holland explains that to place ‘a voyage on stage is, of course, a direct route to dramaturgical difficulty’.[i] Not only are there limitations in quickly changing location, but the depiction of an actual sea voyage also has its own set of problems. A ship itself is a large piece of scenery, not to mention the effects of a storm-tossed sea. Italian drama depicting sea voyages were popular during the Italian Renaissance and were so prevalent that they motivated the invention of devices to help depict life on the sea, despite the challenges.

There were three main devices created for this purpose. One was simply a large painted cloth, which was moved up and down with cords attached to the underside. The second one was slightly more complicated, as it used two-dimensional pieces that were shaped to look like waves, and were then moved in ‘such a way that as one line of waves rose, another lowered to simulate the movement of the sea’. The third device was the most complicated as it was made up of a series of long, spiral cylinders, which created the idea of waves swelling and falling when they were rotated one behind the other.[iii] As an extension to this device, sometimes enough cylinders were used so that changes from ‘calm to storm, from darkness to light, and various other conditions at sea could be simulated’.[iv]

In addition to these methods of simulating the actual water of the sea, they also had the ability to accommodate many people on a ship by pulling a ship across the stage with the help of concealed ropes. To create a scene to its fullest effect, fireworks were used to create lightning; sound was used to replicate thunder by rolling cannonballs down troughs; and wind was simulated by quickly moving strips of wood through the air to create a ‘whirling’ sound.[v]

It is said that the Renaissance in England starts at the accession of King Henry VII, which marked the end of the War of Roses and the beginning of the Tudor dynasty.[vi] Henry VII invited Italian humanists to his court, which aided in the dissemination of Renaissance ideals.[vii] The Renaissance in England manifested itself more in literature than any other aspect of culture, as the Renaissance in England was ‘primarily artistic, rather than philosophical and scholarly’.[viii] Therefore, English dramatic literature quickly surpassed Italian drama, especially considering the internal struggles Italy was facing by this point with the Counter-reformation.[ix] The same cannot necessarily be said about English stagecraft. In fact, Thomas Heywood, a playwright during this time, himself laments the strictures of the English stage, when in Part One of Fair Maid of the West (1597-1604) he has the Chorus say: ‘Our stage so lamely can express a sea/That we are forc’d by Chorus to discourse/What should have been in action’.[x] Heywood appears to be apologising for what his play is lacking: realistic storm scenes. There are incongruities in which the Early-Modern stage had to contend with, which are laid out by Sir Philip Sidney in his An Apologie for Poetrie (1582):[xi]

‘Now ye shall have three Ladies, walke to gather flowers, and then we must elieve the stage to be a Garden. By and by, we heare newes of shipwracke in the same place, and then wee are to blame, if we accept it not for a Rock.’.[xii]

While the Italian stage seems to have progressed during this time, it would appear, based on what Sidney has said, that these advancements would take some time to get to England, much as the Renaissance itself took time to spread into the nation. However, it is not completely true to say that England was devoid of maritime-scene innovations. Advancements were seen first in the entertainments and masques given in the royal sphere.

For example, there was a four-day entertainment given for Elizabeth by the Earl of Hertford in 1591. On the second day, a ‘crescent-shaped lake was dug especially for the water pageant’ (depicted above).[xiii] This shows that water scenes were popular enough at this time to warrant such elaborate steps to be taken. Advancements were not seen on the public stage until much later, however.

Modern-day scholar, David McInnis, suggests that rather than dwelling on the limitations in the public and private theatres, scholars should look at what the English stage was able to accomplish. He cites Heywood’s ‘synergy between stage and ship architecture’.[xiv] Further, he posits that Heywood was successful in his stage endeavours since he created elaborate sea voyages and sea battles more than once. If his staged scenes at sea were not successful the first time, McInnis questions, would he have done it again?[xv]

The most famous play that successfully used such maritime properties as mentioned above was Shakespeare’s The Tempest (1611). This play is likely based on William Strachey’s true narrative ‘True Reportory’, and opens with a shipwreck scene. The Tempest was the first play unquestionably written for Blackfriars Theatre, which had more advanced technology available to the players, as it was a newer playhouse.[xvi] Shakespeare uses this to his advantage by taking a huge spectacle, like a shipwreck, and depicting it on the stage rather than strictly through words.

A depiction from Nicholas Rowe’s 1709 edition of Shakespeare’s plays of the stage direction of the opening of the 1674 adaptation.

The technology available to Shakespeare for this play ‘amounted to little more than the offstage noises’ such as fireworks for lightning flashes or thunder from a ‘roul’d bullet’.[xvii] Thunder was the easiest effect to demonstrate on stage, as it is not a visual effect. There were numerous ways in which this effect could be achieved, the main way being a cannonball (or ‘roul’d bullet’). At the most simplistic, the method involved ‘rolling the ball on the floor of the heavens, to vibrate the wood and produce a thundering sound’.[xviii] Additionally, there had been more advanced methods created, such as the ‘thunder run’, which was simply a ‘wooden trough, either on a fulcrum or sloping along the floor’.[xix]

This trough contained the cannonball, which was either see-sawed or released to create the thundering noise needed in a storm. It got more complicated when separate claps of thunder were needed, as it involved building different levels into the trough. Unfortunately, there is no real way of knowing what method Shakespeare would have used, as references to the thunder were usually confined to the stage note ‘rolling bullet’ without any more specific information.[xx]

What made Shakespeare’s opening scene of The Tempest even more sensational was the fact that he used outdoor effects in an indoor playhouse, which would have fully immersed the audience in the spectacle. The scene would have been as realistic as possible, with ‘mariners in soaking work clothes being hampered in their work by courtiers dressed for a wedding’, which ends in a shipwreck for all of them.[xxi] Visual and audio cues were also essential to the realism of the scene, with effects such as nautical language, appropriate tools that would be needed on board a ship, and a general sense of the ‘frenzied activity’ expected while at sea.[xxii] Furthermore, the stage itself was perfectly set up to depict the deck of a ship, as the arrangement of the stage itself made depicting scenes at sea easier than is generally realized.[xxiii] There are many different ways of using the stage as a prop itself, with the upper stage or balcony sometimes being used as an upper deck or a look-out. Additionally, sailors could call down from the upper stage, and most likely props such as rigging, rope ladders, and other parts of the ship could be expected in some plays.[xxiv]

Therefore, the history of the stage in seventeenth-century England as a whole is a slightly confused one. On the one hand, the English did not have the same advanced techniques that other countries (such as Italy) had during the same time; on the other hand, the English were producing plays about sea voyages that in several ways surpassed those of other countries. The focus in Italy was on the spectacular, and because stagecraft became an extension of art, the emphasis shifted from the players’ abilities to the stagecrafters’ abilities. With England’s past history of absorbing international ideals without changing the essence of English literature, it is possible to say that English playwrights took only what suited them and created a specifically English Renaissance on the stage by not focusing on strictly artistic scenery and machinery. Instead, they used the ideas given and spread their talents over all aspects of stagecraft. English playwrights created a unique stage experience by using a ‘rapid succession of action-filled scenes’ in addition to using the ‘full gamut of theatrical resources’ (such as costumes, properties, authentic dialogue, and sound effects), the ‘offloading of cognitive effort onto the playing environment’ (through ambiguous use of the theatre as ship or the ship as theatre), and the ‘distribution of imaginative work across the entire playing system’ (which includes the audience).[xxv]

[i] Peter Holland, ‘“Travelling Hopefully”: The Dramatic Form of Journeys in English Renaissance Drama’, in Travel and Drama in Shakespeare’s Time, ed. by Jean-Pierre Maquerlot and Michèle Willems (Cambridge: Cambridge UP, 2006), pp. 160–78 (p. 161).

[iii] Lily B. Campbell, Scenes and Machines on the English Stage During the Renaissance: A Classical Revival (Cambridge University Press, 2013), p. 156.

[viii] ‘Renaissance in England, The’.

[xii] Philip Sidney, An Apology for Poetry: Or, The Defence of Poesy, ed. by Geoffrey Shepherd (Manchester University Press, 1965), p. 134.