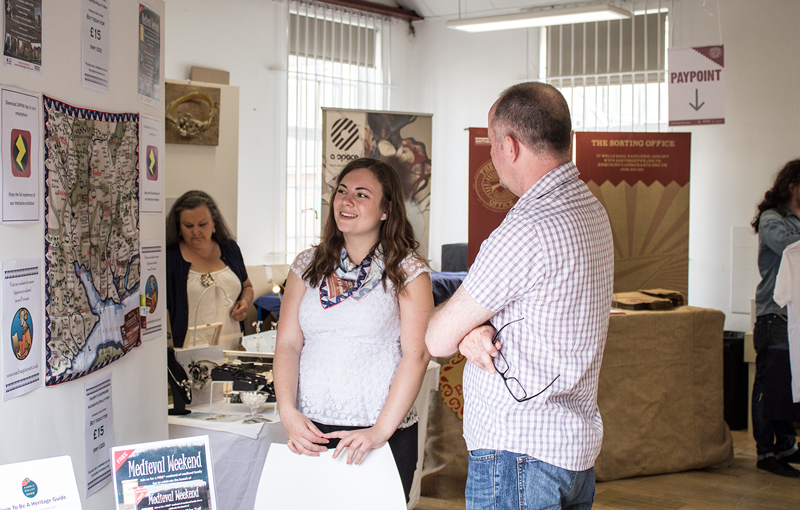 Last weekend was a busy one for the town of Eastleigh with not one, not two but three events over Saturday and Sunday. The weekend kicked off on Saturday, June 11 with the brilliant and vibrant Eastleigh Unwrapped, a festival showcasing the best of outdoor theatre and performance,  followed by a street party to celebrate The Point reaching its milestone 20th birthday on Sunday, June 12. Running alongside these fantastic events was the popular The Sorting Office Summer Open Studios.

The Sorting Office is one of Eastleigh’s hidden gems, an open plan studio space for 16 resident designer-makers. The studio is only open to the public twice a year, as a summer and winter event, so that visitors can meet the residents and have the chance to purchase some of the products available on sale.

The Road To Agincourt team was able to host a stall at the Open Studios over the weekend, to showcase Harry’s Hampshire Interactive Map. Throughout the weekend, the team met a variety of friendly faces who were very interested in how the map works, and were particularly blown away by the interactive content.

“How fantastic, I never would’ve guessed that’s what it does!” one member of the public exclaimed, echoing what most of the public said after being shown what Harry’s Hampshire is all about. “It’s a very interesting product. Definitely more than just a scarf!” said another.

The residents of The Sorting Office also popped by our stall, one by one, over the two days to have a sneak peek at the product that they’ve heard so much about. “How clever!” said Moulou’s Mia, who particularly enjoyed the design aspect of the map. Indeed most of the feedback was that the map was aesthetically very pretty, with colours that complement each other very well.

But what did the public most enjoy about Harry’s Hampshire? The old words for towns and villages in Hampshire, which are taken from the map’s inspiration of John Speed’s 16th Century map of Hampshire. Towns such as “Rumsey” and “Wulston” were particular favourites and there are many more unique spellings to be found.

All in all, the event was a huge success and the team was delighted to be in such a creative and happy environment for the weekend. Thanks to The Sorting Office for their hospitality and to the public for the kind comments – we’re looking forward to the next event!

Remember that Harry’s Hampshire is available to buy online for the exclusive price of £15 here.